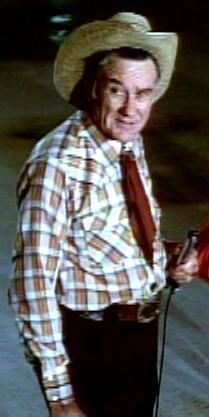 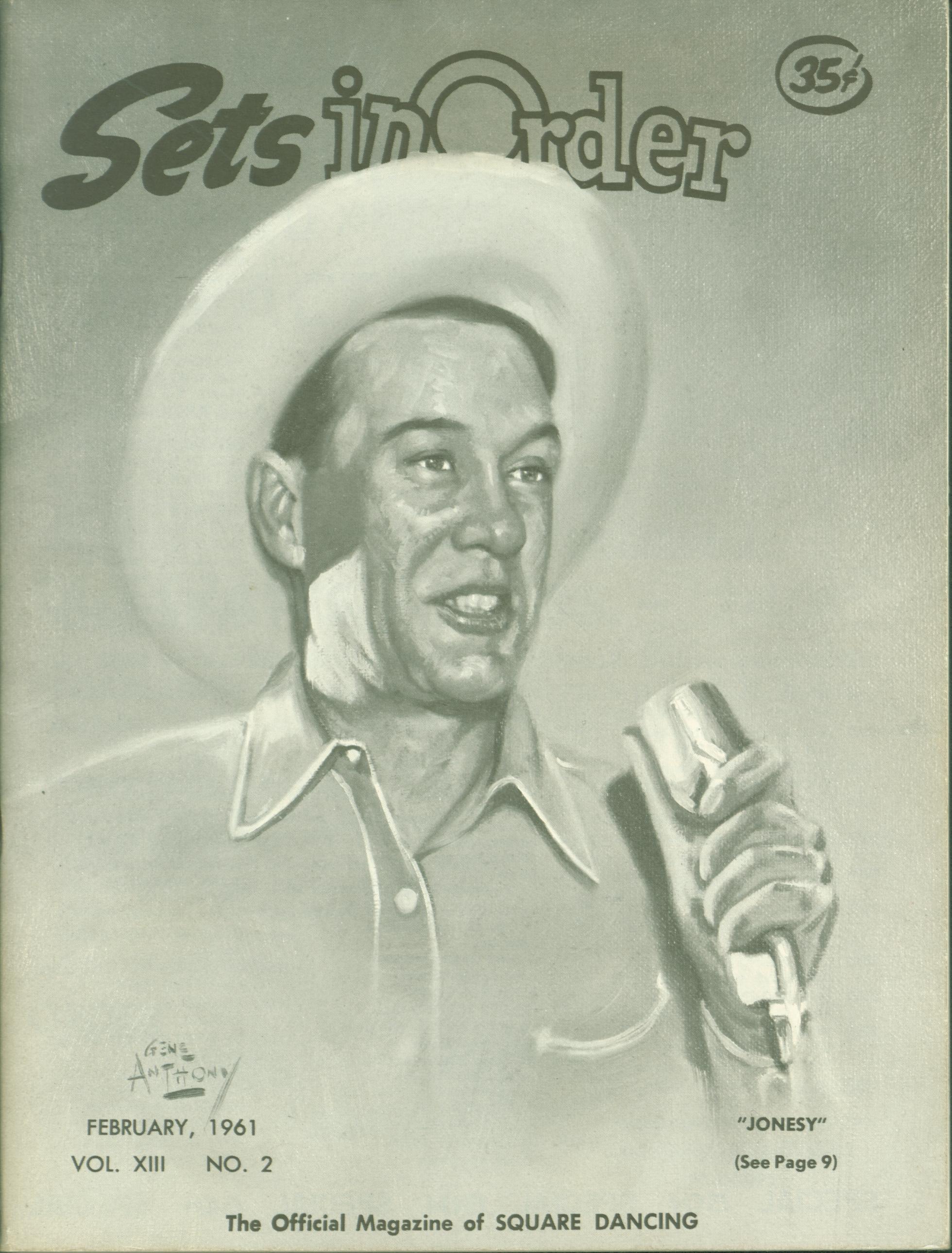 click picture for full size
Sets In Order Magazine Covers - People
Fenton "Jonesy" Jones started his calling in Southern California in the early 1940s. He had the stereotypical look and sound of a square dance caller and this gained him notoriety on several films made by Fox, Columbia and Monogram, and in television shows by General Electric's Halls of Ivy, Bonanza, Warner Brothers, and MGM. Among the first to make square dance recordings, Jonesy initially appeared on the Black and White label in 1946, and since called for Imperial, Capital, MGM and Mastertone records, as well as many years on the C.P. MacGregor label. A member of the Square Dance Hall of Fame, Jonesy was honored with Callerlab's most prestigious Milestone award in 1975. SIO's Article: TO US THERE IS ONE MAN who seems to personify completely the American square dance caller of today; that individual is California born, easy talking, good natured and comfortable, Fenton Jones.

Probably no man ever born with the last name of Jones ever escaped being called "Jonesy" but somehow in this case the nickname is a perfect fit.

Jonesy was the first genuine, no foolin', honest-to-goodness square dancing pro we ever met. Back in the war days (not Civil, son) we were scrounging around for new material" to replace the single working versions of Bird in the Cage and Grapevine Twist that had been worked to death. The few callers who were in our area at the time all told us: "If you want dances — go and see Jonesy."

That was back in the time when a new call was the personal property of the individual and no amount of sweet talk was about to part caller from his call.

We remember our first visit to one of the groups where Jonesy was calling and how, despite severe misgivings, we went up to him between tips and asked if he minded if we made occasional notes. (We didn't always ask permission but in this case it seem the proper thing to do.) "Heck," we remember him saying, "you don't have to make notes. Take my notebook and copy down what you need." We might mention right here that in those days before callers' association notes, square dance magazines, records or books, a caller's little black notebook was his richest possession. It has been said of some of the old timers that they would sooner leave their house unlocked, leave money out on the dresser or lose valuable papers than let that notebook of calls go unguarded for a single minute. Anyway, this act of generosity on the part of this fabulous person (who hardly knew us from Adam) has been a high point in our memory for many years.

Jonesy looks and sounds the way a caller "should." It's obvious that this is the opinion of quite a few motion picture directors and record producers who have seen to it that this western-appearing, relaxed-speaking individual has been featured in more movies, in more television performances and on more records than any other caller in the business. (He's been in Fox, Columbia and Monogram pictures, on the General Electric Theater, Halls of Ivy, Bonanza, Warner Bros. and MGM television shows and has recorded on the Black and White, Imperial, Capitol, MGM, Mastertone and C. P. MacGregor record labels.) Despite all of this Jonesy is without a doubt one of the best representatives of the true friendly spirit that we have in square dancing today.

The fact is that Jonesy wears well. A top notch caller 15 years ago, he's still on the top of the pile today, and chances are he'll be enjoyed in the true sense of the word for a long time to come.

Someone once gave Fenton a bit of advice which he's never forgotten. "Jonesy," this friend said, "if you want to become a successful caller never change the size of your hat band!" Jonesy never has.

We like to think that if there were enough Jonesy-type individuals around today — callers who saw the importance of the local square dance picture in classes and clubs in their own areas, and who were interested not so much in their own significance as they were in the continuance of the activity — that we would have a mighty good insurance policy on the future of American square dancing.

To Fenton "Jonesy" Jones then, our cover man for February, we dedicate this issue.