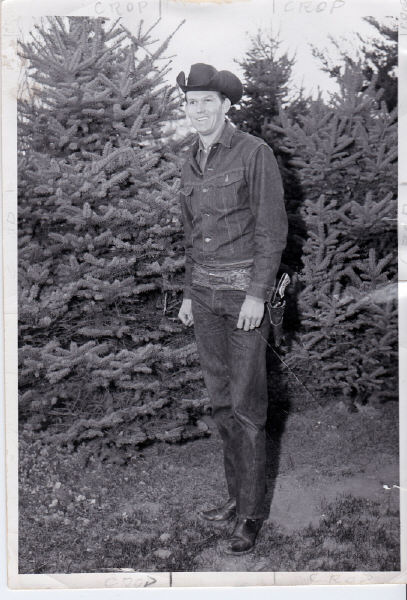 Marvin Shilling was born in Clayton, NM to Oscar and Jessie Shilling, and began calling squares under the mentorship of caller Terry Golden in 1949. Shilling ran the Lightning S Guest Ranch in La Veta, Colorado situated on the eastern side of La Veta Pass through the Sangre de Cristo Mountains, at the northern opening of the Cuchara River Valley. The Guest Ranch was a popular tourist destination for city slickers wanting to play cowboy. The facility also served as a Huerfano County hot spot, with dances held throughout the year. A savvy businessman, Shilling recorded not only himself, but close to 20 different callers on more than 60 records on his Lightning S label. Marvin was a master at traditional western-style calling skills such as calling across the phrase, improvising and playing around with figures, and using patter to emphasize the rhythm of the music. He was very well-known, calling for clubs, festivals, and conventions all around the country from about 1949 until he died when his small plane crashed on January 25, 1962 on his way home from a tour of calling back east. He was very close to home when his wings iced up. He was trying to set down in a field that apparently appeared level because it was covered with snow. In actuality, he hit plowed furrows crosswise, which flipped his plane, and that is how he died.

By the time individuals were able to get to the crash site, the plane had already been ransacked. Marvin had a great deal of money with him from a calling tour of several states he was returning home from, and that was all missing. In addition, his pearl-handled six guns had been taken as well, but grandad persisted in his efforts to track this stuff down, and eventually, unbelievably to me, the six guns were returned; they had apparently been removed from the crashed plane by a member of law enforcement whose conscience apparently got the better of him and he returned the property. Who has them now, I couldn't tell you, but I assume it would be my cousin Darwin, Marvin's son.