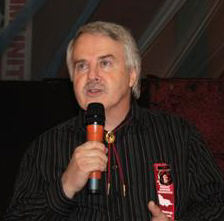 WEB SITE  (http://www.facebook.com/PortMacquarieSquareDanceClub)Calling Mainstream thru Plus


Tony commenced dancing in 1969 and first started calling in 1971 with Ron Mennie and then with Allan Droscher as his mentors. He opened C-City Squares in 1975 with his now wife Christine. Together they also opened Red Hot Plus. Tony served on many committees in various positions including the Victorian Callers Association and the Australian Callers Federation. In 1997 they retired due to family reason and regretfully closed both clubs. In 2012 they moved interstate to Port Macquarie NSW where they have come out of retirement and are opening a new club.

Clubs featuring Tony and Christine Bowring as the club caller or cuer:

No upcoming events listed for Tony and Christine Bowring in the