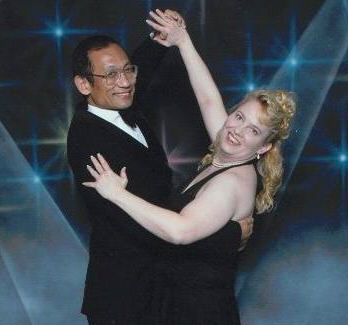 
Tim started dancing in 1973 and teaching in 1976. They teach phases 1 thru 6, cue for the single squares and teach and cue for the Rocket Rounds in Huntsville, AL. Tim has been a GS 14/YA-3 DOD Information Technology Manager for 22 years and has been an Army officer for 24 years.

Cindy learned to square dance in 2006 and began round dancing in 2007. She is a Mathematics Teacher and PHD Candidate at the University of Alabama (UAH). She has been a US Navy Officer for 7 years and was the department head of US Navy Medical Logistics for six years. She is a talented photographer and has a passion for University of Florida football - Go Gators!

Tim has been a member of ROUNDALAB from 1978 to 1987 and 1998 to present. He served on the BOD from 2000 to 2006 and is currently the unphased figures committee chairman. Tim has taught and cued at every National Square Dance Convention since 1998. He has been the featured teacher at national special events in Canada, Australia, Germany and US weekend events including state conventions in Minnesota, Washington and Hawaii. Tim and Cindy recently taught in Virginia, West Virginia, Alabama, Georgia, and Ohio. Tim has been the featured teacher at several DRDC weekends and has presented at several ROUNDALAB National Conventions. He has choreographed numerous dances which include "Long Tall Sally" (Single Swing 3), "Viva Espana" (Paso Doble 5), "Only Time" (Mixed V +2), "Playful Rumba" (Rb 5), "I Can" (Cha 3), "Chain Gang" (TS 2), "Put a Little Love in Your Heart" (TS 2) and "Face to Face" (STS 4).

Tim and Cindy are members of International Choreographed Ballroom Dance Association where they serve on the TAC committee. They are also members of the Georgia Round Dance Teachers Association, Alabama Round Dance Teachers Association, Dixie Round Dance Council (DRDC) and the Weavers. Tim and Cindy are currently learning C-1 square dancing with Darryl McMillan and the River City A's in Decatur, AL and dance competitive ballroom. They currently work with a ballroom coach in Huntsville, AL. Tim is well known for his energetic, melodic cueing and teaching style. They believe you should "dance with passion, be playful and smile."

Clubs featuring Tim Eum and Cindy Hadley as the club caller or cuer: