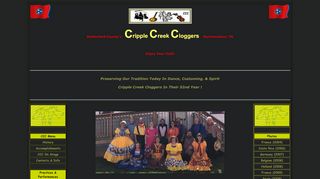 update club info
About Club
Location Map
Events
More Info
Pictures
Contact
Schedule
Beginners thru Plus Dance
Easy Rounds
Every Tuesday
7pm - 8:30pm doors open by 6:45 for warm ups.
First Baptist Church -Gym 200 E. Main St. Murfreesboro, TN 37130 NOTE: Enter on back side of building on Vine St. Across from the Fire Department. Classes are free to adults 18 and over. Class/Practice usually last about and hour and a half.

The Kittrell 4-H Square Dancers (Rutherford County, Readyville, TN) were first recognized
in June of 1967. That's when the hard work of some Kittrell School 4-H'ers (Grades 4-8) paid
off with first place in the Rutherford County 4-H Share the Fun Contest. From there it was
to Columbia, Tennessee's 4-H Camp and first place in the District II Share the Fun. Then the
group performed for the State 4-H Roundup on the UT campus in Knoxville.

The troupe started to learn Appalachian style square dancing with a clogging step during a
camp-out at Camp Woodlee, a former 4-H Camp still operated by the Tennessee Young Farmers and
Homemakers and located in Warren County, near Irving College. To rewardthe Kittrell 4-H'ers,
for which I was a Volunteer Leader, who had completed all their activities each month during
the 1966-1967 school year, I arranged for us to go to the camp for a weekend in early spring.
Parents provided transportation and we all chipped in with the cooking in the kitchen attached
to the Dining Hall. To entertain the group, I went to our Rutherford County Agricultural
Extension Office at the Courthouse and borrowed some of the old records we had used when
I had been a 4-H'er. I got the Kittrell School turntable and sound system. We were set
for dancing, including the calling I did which I had learned at various 4-H events when I
was a teen. I taught the simple steps and calls and then we also did various folk dances,
including the "Teton Mountain Stomp", "The Waltz of the Bells," and so on. We even played
some Tennessee Singing Games, including the "Pawpaw Patch" and "Old Dan Tucker".

Entering the Share the Fun event was a natural progression in our development. The dancers
wore red and white and pictures are available on our Facebook page showing them. Following
that summer, we decided to continue, practicing on the Kittrell stage and in my classroom
at the school. We invited all interested Kittrell 4-H'ers to participate and then began
taking performances to various groups in the area. I remember going to a big event for
the Murfreesboro Business and Professional Women's Club and to the Smyrna Air Force Base
for a luncheon of the Officers' Wives.

When I left Kittrell in 1969 to teach at Murfreesboro's Bradley Middle School, I expanded
the group to include all interested 4-H'ers in Rutherford County. The Ag Center was our
practice site. We were introduced to the National Folk Festival when we were invited to take
our dancing to the 1968 event in Milwaukee, Wisconsin. Sarah Gertrude Knott, the Director/Founder
of the NFF, became quite a good friend and supporter, as well as a mentor. She put us in touch
with May Gadd, Director of the English Song and Dance Society of the U.S. and soon six of us
were on our way to their Pinewoods Camp at Buzzards Bay, Massachusetts, where we learned about
the English heritage of our style of dancing.

Sarah Gertrude Knott also connected us with "Cousin" Thelma Boltin, Director of the Florida
Folk Festival in White Springs, Florida. We enjoyed dancing there several times down on the
banks of the Suwanee, soaking up the Florida sunshine in the spring.

We traveled to events throughout Tennessee and into GA, KY, and NC, including folk festivals
and similar events. Through 4-H connections in other states, we then went West and Northeast
and Southwest.

In 1977, we were invited to our first international folkloric festival. The festival director,
Irene McLean, also Founder/Director of AREYTO, the Ballet Folklorico of Puerto Rica, was to become
a great friend and one who would introduce us to the world of international festivals in other
countries. That first taste of international connections was a magical time for us, as we celebrated
New Year's in San Juan and joined groups from many other countries of the world, all sharing their
music and dance.

Through Irene's influence and with her help, we made our first international tour in 1979. We
enjoyed the Festival of the Pyrenees in France and Spain, which our dancers and musicians revisited
in 2009.

Because of our these experiences and our participation in festivals in Portugal and Spain in 1981,
we began our own International Folkfest in 1982. Our dancers have always been the hosts and have
played a major part in its production.

In 1980, Sarah G. Knott stated that we were losing out by dismissing dancers once they finished
high school. Because of her suggestion, the Cripple Creek Cloggers were then organized. RCSD continued
as we mixed our groups in practices and performances, though sometimes operating separately.

Since the year 2000, we have only been Cripple Creek Cloggers. Our membership includes older teens
and adults. I am proud that our group still offers an opportunity for those interested to join and
work with us. We teach free of charge as we continue to help people to learn about our Appalachian
heritage of music and dance. We also continue touring each year as well as hosting International
Folkfest.
Pictures